ViewPlus Consultant and friend, Tom Johnston, passed away April 23, 2007. This is a small tribute of our love for him. 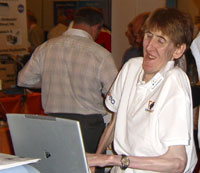 I first met Tom Johnston as he rolled into the trade show at which I was exhibiting. He had come to help me in our exhibition stand. To be quite honest, when I first met Tom, I wondered just how much help he could really be to me. Well it took me all of five minutes to shed any preconceptions I could have had about him. Right away, it was clear I was not dealing with a mere mortal, but rather someone truly unique – not because of any disability but due to the depth of his character and intellect. As it turned out, Tom’s savvy for numbers was not his only talent. People were instantly drawn to Tom and I was thrilled to find I had unknowingly recruited a natural salesman into my exhibition stand.

Since that time, I have tried to find any creative way possible that ViewPlus could employ Tom in our work and capitalize on his immense talents. This wasn’t always easy with Tom in the UK and ViewPlus located in the US but the extra effort to make it happen always paid off. Over the years, he has helped with sales, customer support and numerous consulting jobs. His passing leaves a massive hole in our company both in aptitude and spirit. Those people on the team who worked most closely with Tom are especially devastated.

Tom excelled as a professional but was also a good friend. It didn’t take long after meeting Tom for my working relationship with him to turn into a friendship. We shared the same juvenile sense of humor so we were instant mates. Like all good buddies, we took it upon ourselves to constantly insult each other. Tom particularly liked to tell me how lucky I was to be friends with someone so much younger, better looking and more charming than I. But he said he befriended me despite all this because he was a sucker for the charm of the simple people from the place he referred to as “the Colonies.”

Tom thought it was his duty on behalf of “the Motherland” to teach “the Colonists” about proper conduct. He quickly gave up trying to teach an American about manners, so we focused on sports. While I don’t think I’ll ever share his love for cricket and he certainly never conceded that there was anything good about baseball, we did finally agree that there could always be virtue in enjoying a lager outside while some sporting event occurred around us, so either sport was technically acceptable.

Tom Johnston As I reflect upon times spent with my friend, the same question keeps coming to me. Why is it that someone so exceptional and inspirational should be taken from us much too early? After all, we need people like Tom to remind us about the things that are really important and rise above our pettiness and greed. Perhaps the answer is that someone this extraordinary can only be given to us for a short time. We learn what we can from them if we are lucky. They shine bright and then, like a shooting star, they are gone.

We learn from Tom that it is not about what you are given, but rather what you do with what you have. His ability to forge ahead despite all odds will forever encourage us to reach higher. We will miss Tom’s humor and camaraderie. We will miss his patient manner and wisdom. In the end, we are all better people for having known him.
You will forever inspire us, Tom. We will miss you but in our hearts you will always live on.

Translate »
Select more than one item for comparison.