One of the great parts of my job is learning new things and learning about amazing people. I get to talk to teachers and students all over the country about what they are trying to teach or learn in braille. Before I started at ViewPlus I had no idea that there were different braille languages and some very specialized ones like Nemeth Braille. I thought the story of Abraham Nemeth was a great one to share on our blog.

Abraham Nemeth was born in New York City on the Lower East Side of Manhattan into a large Jewish family of Hungarian immigrants. Blind from birth from a combination of macular degeneration and retinitis pigmentosa; Nemeth did most of his primary and secondary education at the Jewish Guild for the Blind school in Yonkers, New York.  He studied psychology in college and earned a Master of Arts degree in Psychology from Columbia University.

Nemeth studied mathematics and physics as an undergraduate but did not major in mathematics because his academic advisers discouraged him. Not finding his jobs at the agencies of the blind rewarding, he decided to continue his education in mathematics and started teaching part-time at various colleges in New York. Nemeth was able to write visual print letters and mathematical symbols on paper and blackboards which helped him teach in an era without much technology.

During the 1950s Nemeth moved to Michigan to teach at the University of Detroit. In the 30 years that he taught at the University he found that Braille was difficult to use in mathematics. Advanced coursework needed an advanced braille code, so he developed the Nemeth Braille Code for Mathematics and Science Notation, which was published in 1952. The Nemeth Code has gone through 4 revisions since its initial development, and continues to be widely used today.

Nemeth also established the rules of MathSpeak, a verbal system for communicating math. Nemeth needed to make use of sighted readers to read inaccessible math texts and he also needed a method for dictating his work into print. The conventions that Nemeth developed evolved into MathSpeak.

Abraham Nemeth lived to be almost 95 years old and continued to work on Nemeth Braille and other Braille codes up to his death in 2013. 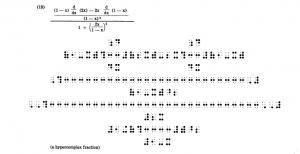 Translate »
Select more than one item for comparison.